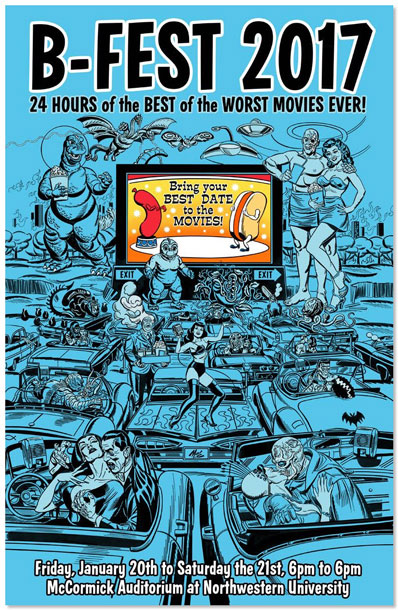 The only way to describe B-Fest would be one of Northwestern's hidden gems; it's something highly overlooked by students. In short, A&O Productions' annual B-Fest is a 24-hour screening of bad movies. From 6 p.m. on Jan. 20 to 6 p.m. on Jan. 21, I stayed in Norris and subjected myself to the worst movies I have ever seen, so you didn't have to.

To get through B-Fest, the website recommends you bring a pillow, a flashlight, a toothbrush and toothpaste, and some cash for meals and snacks. These, they tell you, are just basics. If it were possible, I would add a few extra points to the list: a blanket, because the theater can feel chilly; earbuds, for when it's 3 a.m. and you really want to sleep; and sunglasses and plates if you want to join in on great traditions during the annual movies They Live and Plan 9 from Outer Space, respectively. The sunglasses during They Live were used when the main character puts on fantastical glasses, showing him the difference between the rich and poor, and the plates were more entertainingly used for whenever a UFO appeared in Plan 9 from Outer Space.

One of B-Fest's greatest aspects is the audience. The attendees have the dedication of the legendary Rocky Horror Picture Show audiences, often bringing props and enthusiastically yelling during the movies to make them more interesting. Someone brought in a slide whistle to use during each film's boring parts. Another threw a dummy in the air and rolled a wheel during explosions.

Throughout the 24 hours, I watched a total of 15 movies from a range of genres and decades. My favorite movie, although still bad, was Berry Gordy's The Last Dragon. At first, I was wary of seeing the creator of Motown's attempt at a movie, and I even planned to sleep during it, but something about it kept me awake. The cult classic, a knockoff Karate Kid, not only has great music, but hilarious villains who make the whole film lighthearted and enjoyable.

Even though it is hard to believe, there was a worst of the worst during B-Fest – Malibu Express. The entire audience found it appalling and annoying. The scenes in the movie either made us all laugh at the attempt to be serious, or groan at the offensive nature. Malibu Express has virtually no plot, and can only be described as soft-core pornography. When the credits rolled before the movie started, seeing the long list of Playboy bunnies already made me groan, but as I continued to watch the movie, it only became clear to me that every woman was a sex object, jokes about rape were fair play and being gay was a subject to ridicule. If there is one movie I'd rather forget, it's Malibu Express.

Overall, B-Fest is a great event to take your friends to if you have nothing to do during the weekend. This year, I went alone, but next time I plan to bring adequate supplies and a friend. Hope to see you there!