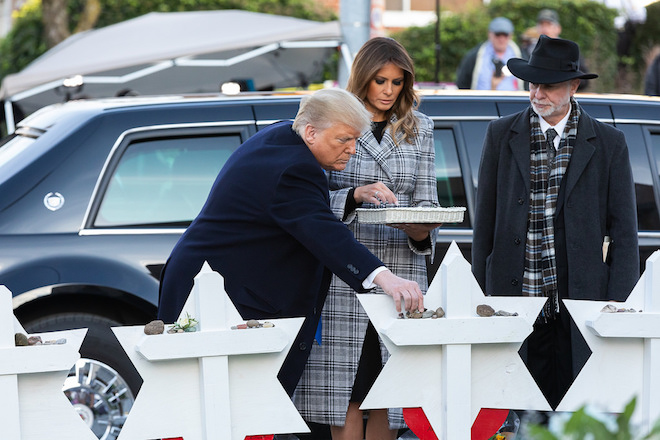 President Donald Trump and First Lady Melania Trump visit a memorial outside the Tree of Life Synagogue in Pittsburgh.

Saturdays are a day of rest in the Jewish faith, a day in which Northwestern Hillel Executive Director Michael Simon would typically be at services. However, on this particular Saturday, he was mingling with families before the football game. He was talking to a family when someone pulled out their phone and asked, "Have you heard this news?" Simon looked at the phone, and learned there had been an attack at a synagogue in Pittsburgh.

"My immediate reaction was, [how] this is such a horrible thing for the people who had family members killed, for the people who experienced the attack, for the law enforcement that had to confront it and for the community that has just been ripped away from their peaceful normalcy," Simon said. "Shabbat is almost like an illusion of a peaceful world, and that illusion was just completely shattered by this attack."

On Oct. 27, a man entered The Tree of Life Synagogue in the Squirrel Hill neighborhood and killed 11 people. The suspect has since been indicted on 44 charges. On Oct. 29, Northwestern Hillel hosted a vigil in honor or the victims of the attack.

Safety was Hillel's top concern after hearing about the attack, Hillel President Andie Linker said. NUPD reached out to Hillel following the attack to let them know that they would be working with them to ensure campus safety. Working with chaplains, religious and spiritual leaders, Hillel made sure to include many voices in the vigil and to focus on the victims of the attack. They also worked to provide a space for people to offer songs and prayers of healing.

"All we really have is each other in these hard times," Linker said. "We really need to continue to come together. The most beautiful thing that I saw [at the vigil] was that there were so many beautiful people coming together, people of different backgrounds, faiths, opinions.”

Weinberg freshman Jacqueline Olson said Jewish people have been persecuted and pushed out since the beginning of time. “This attack shows that even in a country that's supposed to have religious freedom, [anti-semitism] is a still a current problem,” she said.

"He's just very degrading," Cherkas said. "We think it’s okay to treat one another based on how we see our government treating people. I think we need to realize as a society that that's not okay. It never has been okay, and it never will be okay."

Cherkas also noted the sadness of having to worry about ones’ safety in a synagogue.

“It’s just very disturbing that a temple, a place of worship, is a place where you could die because of your religion,” Cherkas said. “At my temple, we usually have armed police officers there for the high holidays; I don't think we have them for normal shabbat services, I don't know if that will change in the future. There should be safe spaces where your physical safety is the last thing you should have to worry about, and I think we might need to start talking about that.”

Linker said she believes we need to openly start talking about the hatred inflicting our nation, and that when attacks like this happen to a community, all communities must stand up together and join hands.

“It’s time that everybody stands up against gun violence and against hate,” Linker said. “I think that we just need to address that there’s consequences, and they're consequences we’re living with right now. Hopefully when the grieving period is over and people feel more strong, we can take action.”