“For those that think that it hasn’t caught on yet, I think they’d be surprised to know actually how much it has already.” Reality Bytes co-founder Alex Paull is talking about virtual reality. On Feb. 22, Reality Bytes, a Chicago-based on-demand virtual reality company, came to The Garage at Northwestern, bringing along an assortment of their state-of-the-art virtual reality gear. The purpose of the event was to show Northwestern students how to use the technology, as well as to teach them how virtual and augmented reality are making waves in almost every professional field imaginable.

Last January, a friend of Paull and co-founder Lorne Rodrigues stopped in a pub in England that had a virtual reality setup in the corner. His experience sparked an “aha moment,” and he told Paull and Rodrigues. Hearing how their friend felt after trying VR made them want to spread similar experiences to the masses. They decided to spread life-changing and immersive experiences like these through an on-demand VR company for schools, entertainment industries and the business world.

Paull and Rodrigues kicked off the event with pizza and a presentation defining VR, sharing its surprisingly long history and detailing its fascinating uses in 2018. 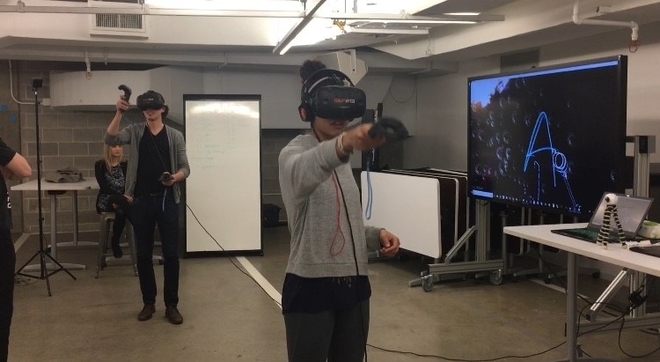 VR Demonstration at the Garage

“It’s turning a corner now, where the practical uses are coming out of the woodwork, and really big industries are starting to utilize it," Paull said. "Whether it's for movies, concerts, entertainment, design, medical training, you name it… virtual reality is finding a home in everyday industries.”

One of the major applications of virtual reality is in education. When a student puts on a virtual reality headset and earphones and holds the handheld devices, it gives them the unique opportunity to visualize and immerse themselves in concepts that would have been 2-dimensional or impossible to truly appreciate otherwise. This means bringing art to life, getting a microscopic tour of the inside of the human body and conceptualizing physics in new, tangible ways. Reality Bytes is in the process of creating an application called “Geometry Bytes,” which would allow high school students to create and manipulate 3-dimensional shapes.

VR is also making major breakthroughs in medicine by training surgeons how to do complex operations through virtual reality instead of using a cadaver, and exposing patients to different therapies for disorders such as PTSD, anxiety disorders and phobias.

On a lighter note, screening, journalism and gaming are taking on a whole new persona. When using virtual reality goggles, 2D gaming is a thing of the past. One can fully step into a game and become a part of the Minecraft landscape. Instead of reading a story about the Oscars, with the help of VR and 360-degree cameras, you can use a virtual reality headset to stand in the front row and look around at the actors and actresses reacting to getting awards.

“There are a lot of different practical use cases that virtual reality is finally being introduced to, versus just being some sort of abstract technology,” Paull said.

The co-founders told the 20-something attendees that virtual reality is not only already used in various contexts, it is becoming even bigger by the year. They estimate that 80 million households will own VR/AR technology by the end of 2020. Standalone headsets like the Oculus Go are currently going for $199 in stores. If your dream is to step into an alternate universe, it is starting to become a reality.

After the presentation, the attendees were able to try out three different, equally awesome, virtual reality applications: a galactic shooting game, a drawing and painting program and a simulation of a blood vessel.

I was able to tour a virtual blood vessel and create my own scintillating, rainbow masterpiece. The inside-of-the-body application was like a college tour, but inside a microscopic vein. My headphones told me what I was looking at and the science behind the sensations around me. Additionally, I was able to inflate and shoot my own “blood cells” into the vessel! So. Freaking. Cool. Then, for the art application, I used different paint strokes, sparkles and colors to write my name, peace signs, scribbles and shapes that were three-dimensional. I was literally surrounded by a sparkling wonderland that I created.

Sounds fun, right? It is. And this technology is becoming more accessible to a much larger audience, so, chances are, you’ll probably get the chance to try out the technology in the next few years.

“The standalone headsets are going to provide a level of VR that is much more for the masses, and they’re gonna be at a price point that allows many more people to get them,” Rodrigues said.

The event was a success: experiencing life in a different dimension was unforgettable, and from what the co-founders of Reality Bytes were saying, it seems like we’ll be seeing a lot more of it in the near future.

“We’re very excited that virtual reality will be here to stay,” Paull said.